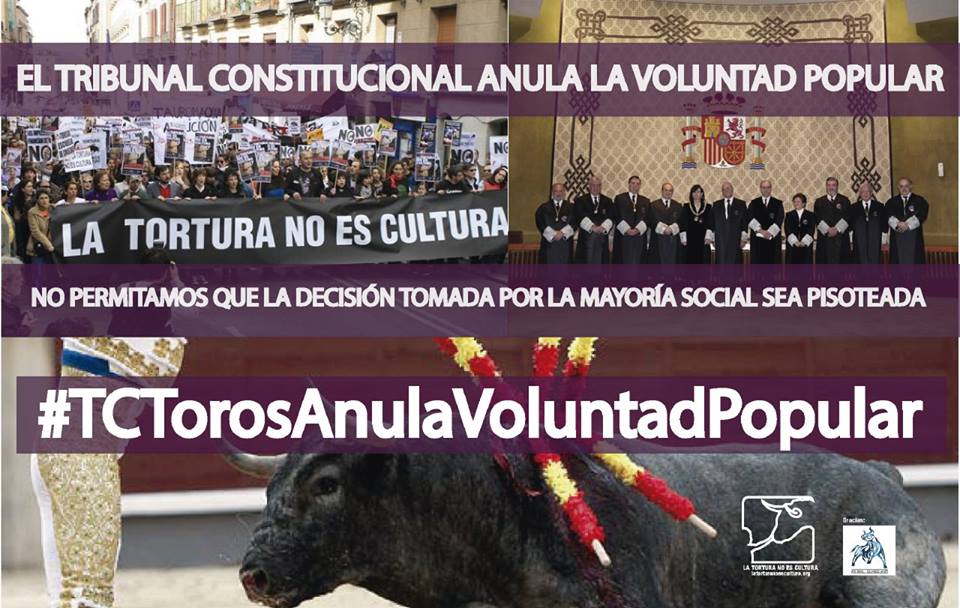 October 20th, 2016 – Communication from the Platform Torture is not Culture/PLATAFORMA LA TORTURA NO ES CULTURA (LTNEC) about the annulation of the ban of bullfighting in Catalonia

The decisions that we might take from LTNEC will be announced once the Constitutional Court (TC) make it’s ruling public and we have our law experts analyzing it.

We believe that this action from the Court, whose members impartiality have been questioned in several occasions – is based in political matters. Proof of that is that in Canaries bullfighting has been eradicated many years ago and that has not been a problem concerning its constitutionality nor to any political party or social group and no measures have been taken about it.

We see it as an extremely unfortunate measure because it affects what is the maximum expression of a democratic system; a Popular Legislative Initiative (ILP), and because of that we are considering to appeal to high international instances to defend this fundamental right.

Bullfighting will not be back short or medium term in Catalonia for three fundamental reasons:

1. The Monumental (Barcelona’s bullring) is ruled by Barcelona’s legislation that does not allow bullfighting as it’s Mayor Ada Colau already stated; and the other two bullrings (Olot and Tarragona) do not fulfil the necessary requirements, hence they would have to be renewed.

2. The regulations that bullfighting could be submitted to, and that are competence of the “Autonomic Communities”, could end up being so much modified, that the activity would lose all its interest to the aficionado.

3. The “Generalitat” has already stated that will not comply with the Court’s ruling.

UN’s Comity for Children Protection have asked the member states where there are bullfighting – in its reports – to protect its children from both physical and psychological harm that that activity provokes. We are convinced that Barcelona, recognized by UNICEF as “Ciudad Amiga de la Infancia” since 2007, will keep being a pioneer in what concerns public politics to protect the children and also animals, and will articulate all the mechanisms needed to set an example.

From Plataforma La Tortura no es Cultura, we will keep working in coordination with the animal protection movement in Catalonia, namely the PROU Platform, who promoted the Iniciativa Legislativa Popular to ban bullfighting in Catalonia.

“We see it as extremely serious that the judge Encarna Roca and the Court have ignored the express recommendations from the UN and the supreme interest of children. We are sure that Barcelona, recognized by the Unicef as Ciudad Amiga de la Infancia since 2007, will keep being a pioneer in what concerns public children politics and will articulate all the necessary mechanisms to keep leading by example“, says Dr. Núria Querol, Professor in the University of Barcelona and an expert assistant in violence matters to the FBI.

Marta Esteban, the President of the Platform, states that “This is an attack to the maximum expression of democracy, which shames us once again. A political measure, taken by a Constitutional Court, whose impartiality have been question in several occasions. Time will show that the popular will cannot be stepped on and that bullfighting will not go back to Catalonia“.

Sergio Torres, institutional relations’ responsible for the same Platform believes that “if the people’s opinion is undermined, people that have freely used it’s democratic right through an ILP (iniciativa legislativa popular) to eliminate some cruel spectacles, the cultural protection that the Spanish Central State imposed cannot be an excuse to protect an industry that is rejected by the majority of society“.

From LTNEC we will take all measures in order to make the people’s will to end mistreatment of animals as a public spectacle respected in all Spanish territory, and also the protection of children from he violence that bullfighting is, just like the UN’s Children’s Committee advises. We will also keep working to end the public funding of such gruesome activities.